Český Krumlov (German: Krummau an der Moldau or Böhmisch Krummau) is a small city in the South Bohemian Region of the Czech Republic where Český Krumlov Castle is located. Old Český Krumlov is a UNESCO World Heritage Site and was given this status along with the historic Prague castle district.
The city is named Český Krumlov ("Bohemian Crumlaw") to differentiate it from Moravský Krumlov in the southeast of the country.

Construction of the town and castle began in the late 13th century at a ford in the Vltava River, which was important in trade routes in Bohemia. In 1302 the town and castle were owned by the House of Rosenberg. Emperor Rudolf II bought Krumlov in 1602 and gave it to his natural son Julius d’Austria. Emperor Ferdinand II gave Krumlov to the House of Eggenberg. From 1719 until 1945 the castle belonged to the House of Schwarzenberg. Most of the architecture of the old town and castle dates from the 14th through 17th centuries; the town's structures are mostly in Gothic, Renaissance, and Baroque styles. The core of the old town is within a horseshoe bend of the river, with the old Latrán neighborhood and castle on the other side of the Vltava.
The town was seat of Duchy of Krumlov. 8,662 inhabitants lived in Krumau an der Moldau in 1910, including 7,367 Germans and 1,295 Czechs.
During the interwar era it was part of Czechoslovakia. Between 1938 and 1945 it was annexed by Nazi Germany as part of the Sudetenland. The town's German-speaking population were expelled after World War II and it was restored to Czechoslovakia.
During the Communist era of Czechoslovakia, Krumlov fell into disrepair, but since the Velvet Revolution of 1989 much of the town's former beauty has been restored, and it is now a major holiday destination popular with tourists from Germany, Austria and beyond, as far as China. In August, 2002, the town suffered from damage in the great flood of the Vltava River.

Český Krumlov Castle is unusually large for a town of Krumlov's size; within the Czech Republic it is second in extent only to the Hradčany castle complex of Prague. Inside its grounds are a large rococo garden, an extensive bridge over a deep gap in the rock upon which the castle is built, and the castle itself, which in turn consists of many defined parts dating from different periods of time. After the garden was not adequately maintained during the second half of the 20th century, the site was included in the 1996 World Monuments Watch by the World Monuments Fund. With financial support from American Express the garden's central fountain was documented and reconstructed, and is functional today.
Church of St. Vitus (Kostel Sv. Víta) is a Gothic church dating back to the 15th century with frescoes from the same period.

Český Krumlov Castle preserves its Baroque theatre, built from 1680-82 under Prince Johann Christian I von Eggenberg and renovated with modern (at the time) stage equipment under Josef Adam zu Schwarzenberg from 1765-66. With this original stage machinery, scenery and props it is among only a few such court theatres that still exist. Due to its age, the theatre is only used three times a year (only two are open to the public), when a Baroque opera is performed in simulated candlelight. The castle's last private owner was Adolph Schwarzenberg. It was here that he received President Edvard Beneš and gave him a large contribution for the defence of Czechoslovakia against the growing threat of Nazi Germany. His property was seized by the Gestapo in 1940 and then confiscated by the Czechoslovak government in 1945. 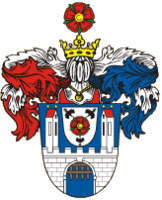